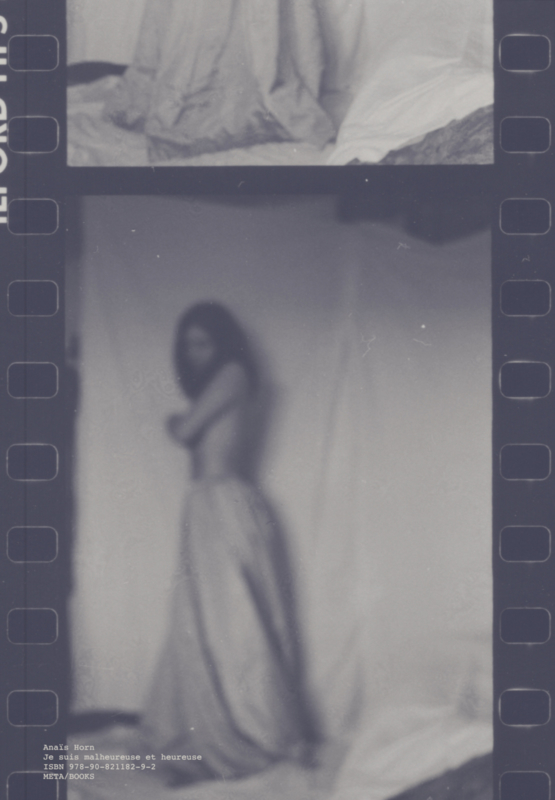 The photobook “Je suis malheureuse et heureuse” presents Austrian-born, Paris-based artist Anaïs Horn’s latest work on French author Anaïs Nin’s early diaries, the “Journal d’enfance”, written at the age of 16 in 1919–1920. In its first pages, Nin sets the tone, describing her discovery about her coming of age, her life between 11 and 18: “Je suis malheureuse et heureuse”. That is the core sentence and title of Horn’s project, consisting of intimate portraits of girls between 11–18, shot at her studio at the Cité Internationale des Arts in Paris. Exactly 100 years after Nin’s writings, Horn explores the magic and the problems of being a  female teenager, the rites of passage, the timeless and the time-specific topics of female coming of age.
Besides the portraits, the book will include stills from the video “La Boum”, which Horn developed with a 15-year-old dancer, original texts and ma nu-scripts from Anaïs Nin’s journals, diary fragments from American poet and researcher Jackie Wang, and texts by Maren Lübbke-Tidow (DE) and Verena Walzl (AT). The  book is designed by Fondazione (AT).

“Openness and reticence, strength and vulnerability, self-confidence, and uncertainty about the world are all expressions of the self, which in pictures of youth are often close at hand. Perhaps they are saying, through Anaïs Horn, so aptly: Je suis malheureuse et heureuse—and the whole ambivalence of the being-in-the-world becomes tangible.” Maren Lübbke-Tidow

EDITOR’S STATEMENT
Anaïs Horn’s book project “Je suis heureuse et malheureuse” is a publishing experiment at the intersection of photography, literature, performance, and video. The artist explores the legacy of Anaïs Nin’s journals and their influence on her life and her work. Through close collaborations, she experiments with diaristic practices, bringing together artists, writers, and a graphic designer.
Texts, journals, and images are interwoven in a subtle and collaborative editorial process. Personal narratives intersect through time and place over a hundred years and three continents. This polyphony, these resonances stemming from Nin’s journals make the book very singular and correspond precisely to what we are interested in publishing. Delphine Bedel

Welcome to the of META/BOOKS. Here you can order books and editions directly from our stock. We send to almost all countries in the world.

. For Dutch customers we also accept payments done by iDeal.

With an account you can order faster and you have an overview of your previous orders.